It made me nervous

I ordered ice resin back at the begining of January, and I've been dying to play with it, but it gave me heart palpitations. I know how stupid that sounds, but seriously, everything I read about using it talked about how unforgiving it was…and this stuff isn't cheap.
So I decided to start small, just half an ounce, which as it turns out, isn't so small. I covered four butterfly stickers to give to my nieces and still had a ton of ice resin left over. Since I'd read all about the stuff before I got up the nerve to actually use it, I knew it could be used in silicone molds, and I just happened to have some heart shaped silicone ice cube trays i wasn't using…but they're waaaay to big to fill completely, so I decided to "paint" the sides and bottoms. So far…it's not really working :(

The problem is that silicone works so well with ice resin because it doesn't stick…yeah. Not so smart. So I've been getting up every few minutes to swirl it around the molds hoping it'll get thick enough to stop sinking to the bottom. Right now it's at corn syrup consistency, and I'm hopeful. I'll update in the morning, but it's gonna kill me to have to wait that long =[ 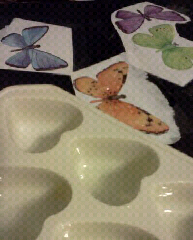 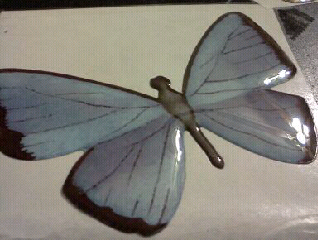