Monday I was at my Mother's for Memorial day, we'd decided on a cookout, even though it was rainy all day, it came out OK though. After everyone had eaten, I'd cleaned up and done the dishes while everyone moved to the living room to chat and catch up. I started getting kinda bored (and as my brother get's older, he gets louder, lol) so I moved to the dining room and pulled out my bag of sea glass from Znetshows.com. First, my brother's daughter started watching me wrap some wire around a tusk, then quietly asked if they were going to be earrings...she collects earrings like my sister's daughter collects shoes, the more the better.

Then the boys followed.

All three started going through the beads, picking them up, turning them around between their fingers, holding them up to the light. Asking how I did it, where'd I learn to make jewelry, how did I know what to do with the beads and the wire. Josh and Danny were facinated by the viking knit anklet I was working on. I had no idea they'd be so interested, their parents had to pry them away when they were ready to go...but not before they picked out the beads they liked and asked for their own jewelry. I tried to talk them out of bracelets, but they want viking knit bracelets with pendants...but not Kadyn he's been tramatized by a too small wire bracelet, so he just wants a plain one with only the small blue starfish button bead.

In other developments, I forgot that I'd finished an anklet with some of the beads that I got recently from Bill at Znetshows.com. I think it slipped my mind because it didn't really work out so well...then I attempted another that still didn't work out so well...and then another...I was on a roll, I guess I wasn't meant to do anklets this season apparently. Here are those: 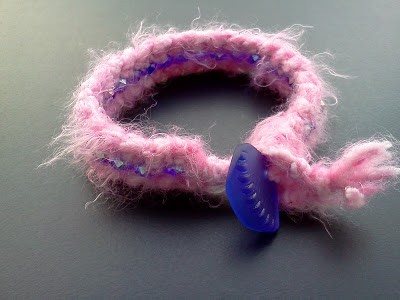 This was actually the first piece I made, it fits, it's comfy, but it's so fuzzy you can't see the blue crystal beads very well, and the bottle shard twits till it comes out of the knotted loop. 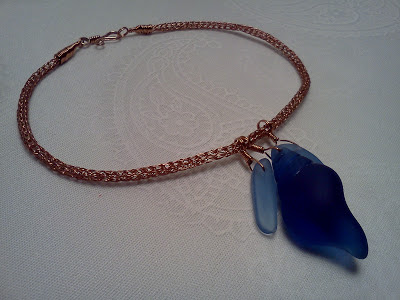 The viking knit I made for BSBP7, but it didn't work...and neither do those dangles, wayyy too long, they touch the floor when I put it on, lol. I think their new mini conch shell beads would work though, I'll have to let you know when I order some. 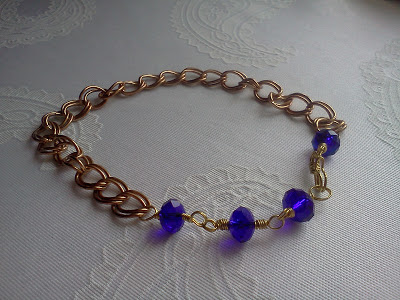 I think this one needs jump rings or something between the links, because it keeps twisting on me when I try to add wire wrapped sea glass, and it ends up laying the wrong way. And, I can't seem to figure out how to add them to the double link chain without it kinking up on me. 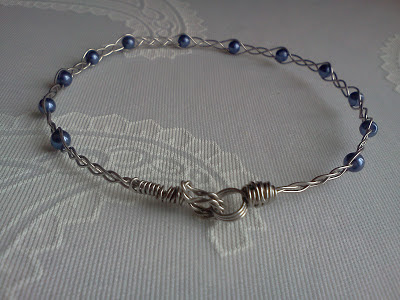 This one isn't exactly a failure, it just didn't end up long enough to be an anklet. I didn't cut enough wire to make the clasp at the end of the wire and still have enough length for an ankle, but it works as a bangle bracelet.

I think if I can redo the knot in the first one, it's salvageable. The middle two are going to be do overs, the last one I'll just keep playing around with.

All of the beads in these pieces came from Znetshows.com. The sea glass I've highlighted before, but the last one is made using 3mm glass pearls, which they have tons of, in several sizes and colors at great prices.

Oh, yeah!!...and I've been asked if I'd like to participate in the Znetshows June challenge. We're being partnered for this one, and instead of choosing from our own stash, we were given a file from which to choose beads from their stock to be sent to our partners, and a pinterest board of photos to inspire us. I chose this photo as my inspiration for choosing beads for my partner Bee Kuhlman of Mixed Mayhem Studios, and she chose this one. So. Much. Fun!!! Stay tuned for details.
Posted by Klaudete at 1:22 PM