Back in April I was working on my main BSBP7 piece and decided I wanted to take it apart and start new, and use some links that I had made a few months ago to go with links I was making specifically for the piece. They were in a box my sister had given me to keep and carry my finished pieces...an old matchbox car box my nephew never used. I went looking for the box and over the course of two days went from bewilderment to complete insanity. I called everyone who might have seen it. Then made an album on Facebook (which I then shared ALL over facebook) of the pieces that were in the box. I was heart broken. I seriously believed someone had come into my apartment and stolen just my finished pieces of jewelry. I shared the album on the Bead soup cafe group page and Bill Zhang of Znetshows.com, among a few others, offered to send me beads to help me rebuild my collection. I told them I was ok in beads, just really upset at losing my collection, I received the beads a few days later anyway, and I think two or three days later I found my collection...under a chair I recall looking under at least twice. Weird. I felt terrible though, so I offered to pay for them, and he suggested a challenge instead:


A reminder of what Bill Zhang of Znetshows.com sent me to work with. 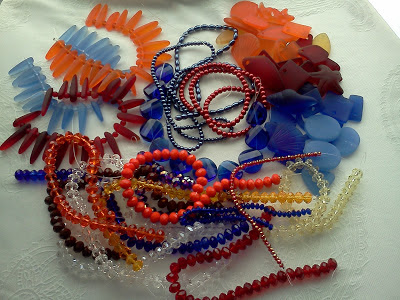 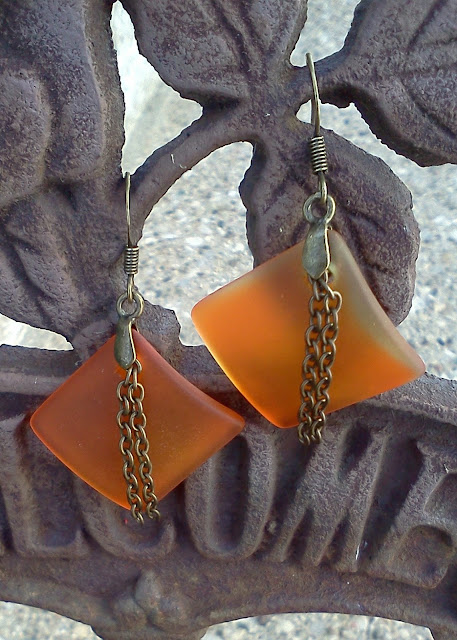 This one was supposed to have all kinds of dangles off the bottom of the bottle top ring, the blue shell and some shards, but when I did that, it just wasn't what I was picturing, so I took it all off and decided to see what it would look like wrapped in shells...I like it. There's so many things you can do with these glass bottle rings. The spiral cord is dyed nylon cord in a spiral knot and wire wrapped in 24 gauge steel wire. 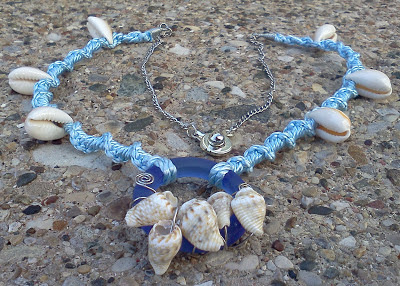 I LOVE the large holes in these square concave pendant beads, you can string all kinds of cords and even ribbons and fabric strips into them, and they're available in large and small. I had orginally came up with this on Earth Day, but then set it aside when I realized my upcycled strips of rayon fabric weren't long enough. I used square knots to hold the beads in place, and that got a little tricky since I started in the middle and worked my way out on each side. I kept getting myself turned around and one side the beads were turned backwards because the cord had to be folded in half and not pulled all the way through bead, but instead the cord through the loop you create. I found if I lay the cord and all the beads face down, and then feed it through the bead from the front, it was easier to keep them all going the right direction. I was going for minimalist art deco, but I also wanted it to be more casual than dress, so I used a natural cotton twine. Then I wire wrapped the ends and made a hook and eye clasp out of 20 gauge copper wire. 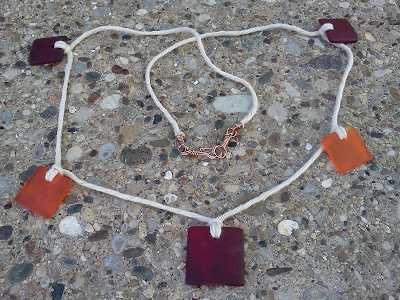 This set I did Sunday night, I had sat down to finish another piece, which is still unfinished, while watching Firefly on DVD (why did I never see this show?) So, those are bead caps. Aren't they pretty? I've had them for a while and couldn't find anything I liked them for because if you put them on the ends of beads, you only see the outer edges, I didn't like that. And these marquise spindle pendants are just beautiful in the light, you can't see it as well here, but these have a little bit of a yellow swirl in them too. I made bead links out of the opaque tangerine Tiaria Chinese crystal rondelles, I loooove how bright they are! The pendant moves freely on the middle length of chain. The earwires are my first attempt at this kind of earwire. 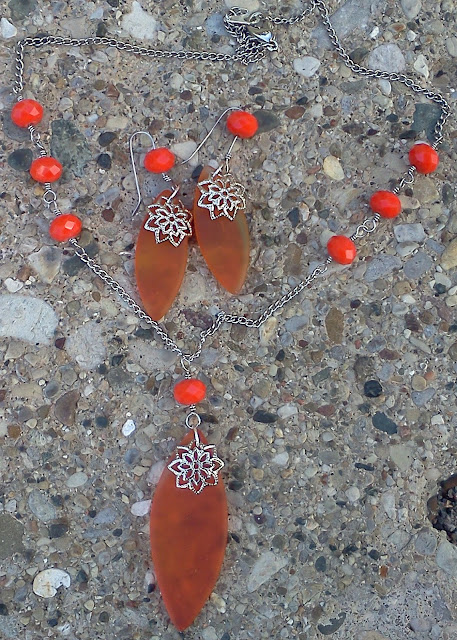 I had to add some bead weaving, though I actually should have had several. I abandoned two pieces, one halfway, the other nearly complete (don't ask me, I have no idea). I'll finish them though, and make another post, this one's already late.
This bracelet is my version of the ombre craze going around right now. It's done in a right angle weave, but I had to add some seed beads to hide the thread, because the 8mm Chinese Crystal rondelle beads were actually a little too big for this stitch, it worked out, though in retro I might have used a like color seed bead with each section, instead of clear all the way through. 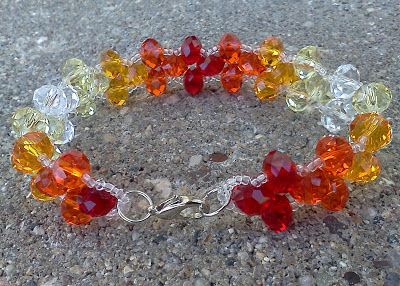 This piece is why I don't have more pieces done...I started it on Earth Day, and just couldn't put it down. I kept adding and subtracting from it. It's made from an upcycled skirt that I loved and wore two or three times before someone said..."Klaudete, you look ridiculous in that skirt." So, I packed it away with other scrap materials and clothes made from fabric that I loved but wouldn't be caught dead in...I think it was in my craft bin for at least 20 years, lol. I just took one small section off and got tons of 'ribbons' from it. this is six strips, tied about eight inches from the end, knoted in a square to flatten and even out the fringe and then braided for the necklace end. I wire wrapped the end of each fringe and added opaque brown, clear tangerine, and silver Chinese crystal rondelles in 4mm and 8mm...and just kept adding; tusks in cherry red, a large shard pendant in cherry red, and a top drilled free form flat sea glass pendant in tangerine. By the time I was done, the fringe section alone was six inches. I wire wrapped the ends of the braided section, and originally only had the 4mm silver tiaria chinese links at the top, making it a twenty inch necklace with a six inch beaded fringe. So then on Sunday night I was just looking at all the finished pieces and, I don't know, I guess I thought it wasn't done...so I added five inches of beaded links and five inches of chain. This crazy thing is 21 inches from clasp to the bottom most bead, doesn't even need the clasp to be honest 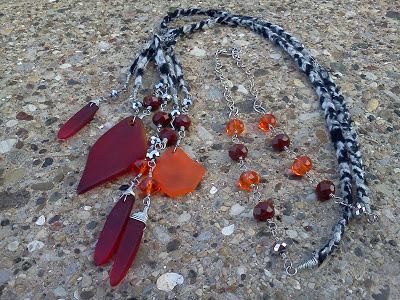 Well, that's it so far. I do have two more finished...sort of, so I'll take photos of those tomorrow and post again when I can.