As I posted earlier this summer, I signed up for Lori McDaniel Anderson's Bead Soup Blog Party, in it's 6th, and final biannual edition. Since it was the last to be held in it's twice a year form, all who applied were accepted and so 400 participants had to be split into three reveals. Could you imagine hopping 400 blogs at once?!?! Well, then…you still can! All of the participants blogs can be accessed through Lori's blog Pretty Things, under the bead soup blog party tab on the right and through this awsome page put together by Tanya Ozanne of Fusion Muse. AND a Pinterest Board has been set up for participants to share photos of their creations from the BSBP6. Happy hopping!

And now it's my turn to reveal what I made with the bead soup sent to me by Karla Morgan of Texas Pepper Jams, who is unfortunately not well and will reveal at a later date.

Just a slight warning, I use an android powered smartphone as my internet access, and blogger's own app to post, and I seem to have no control over what order pictures are posted and it'll only post my photos at the end of each post :( so I wont go too in depth with my process.

First, the clasp. A beautiful floral toggle in bronze. I've used toggles before, but not one so large or so pretty. I racked my brain for some way that I could use it without hiding it at the back of my neck. I'd done a "floating pearls" necklace before, but I'd been toying with the idea of floating gemstones using these gorgeous micro-faceted gemstones I found at my favorite bead store a couple years ago. But I wanted it to be multi stranded. I thought the two were perfect, because I wouldn't need to adjust the toggle if it slid around to the side.

The focal took me a bit longer to do, I love the color and the weight, but I knew I would need to have someone else in mind for this one. Because of my thyroid disease I've developed a slight goiter and any  heaviness around my neck irritates me. My niece on the other hand LOVES big, bright, and bold jewelry. I'd started on the large bright pink beads first (my mother would not be surprised, I begged for hot pink anything growing up…which she insisted did NOT look good on a redhead :| whatever :P. My solution has always been to pair it with green (nobody denies a redhead green :) But…then I started having some issues with my wrists and hands (and balance, after wasting money for a neurologist to stick my wrists and elbows with safety pins, I fell three times in one week, resulting in a large gash in my palm), and was told to back off the beading for a bit (arthritis…blech) And so I only finished netting four of the eight beads I was sent. But as it turns out four was more than I needed.
I wanted her to have some part in the making of the necklace, so I had her paint a large length of nylon cord with watercolor in yellow and pink so that it would match the shimmery colors of the smaller glass beads in the soup. I then rinsed, washed, and rinsed it again. Dryed it, and then dipped the ends in fingernail polish so I could string with it, and let it dry some more. I had originally intended for her to get to tie the knots, but she was more interested in watching Hunger Games! And even though I had her paint four feet of rope, it wasn't enough, I had to crimp the ends and add chain and a snap clasp so that it would be long enough. But I like that part of it too, to be honest.

I still have a quie a few beads left in my soup, and started on another project using the squares that are some kind of purple died shell, but that one will take me a bit longer. I shall reveal it when I'm finished though. :) 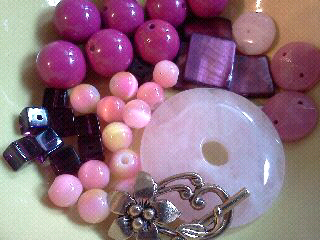 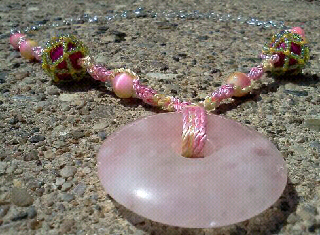 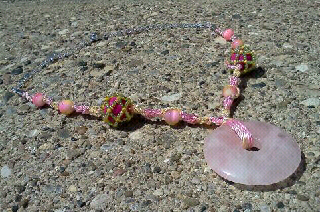 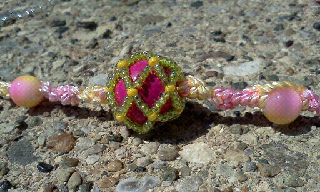 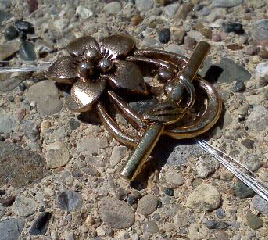 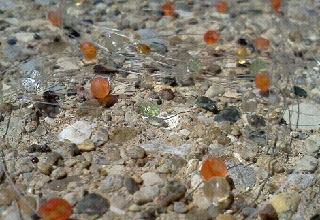