BSBP6: What I sent and what I recieved

As I mentioned in my last post…ages ago…I'm participating in Lori Anderson's 6th Bead Soup Blog Party. She kept this one last, twice a year, blog hop open to all interested parties before making it an anual affair next year, so I'm excited to get to participate along with the nearly 400 other beaders.

My bead swap partner is Karla Morgan, Of Texas Pepper Jams (will add a link later), and I picked out a few late summer early fall colors for her, I think because her blog reminds me of harvest time, my favorite time of the year. There's an agate no hole oval, a yellow disk that is supposed to be yellow mother of pearl (though i suspect it's not, but it's lovely all the same…and I lied in my last post, I bought this to use in a piece while I was doing french bead flowers and decided it was too pretty to hide behind other beads) either of which she can choose as her focal. And for the clasp i sent her a heart shaped goldtone box clasp that I fell in love with. Box clasps are so hard to find around here and along with my girly love of butterflies, I'm drawn to hearts. There were only two, and they were being discontinued, so I grabbed them both and I can't wait to use mine :). I also added aventurine, amethyst, goldtone square metal beads with a celtic knot, a few wooden beads, and a handful of glass accent beads. The picture isn't completely accurate though, I added a couple other beads not pictured after I took the initial photo and forgot to take another.
And the bright spring colored set is the lovely bead soup Karla sent me. Such beautiful shades of pinks and purple. I've never used a large focal bead…or a donut for that matter…and the large togle clasp is a first for me too. I always seem to gravitate to dainty and delicate. In fact, when I received her envelope, I realized almost everything in it was going to require learning a few new techniques…such a burden, right ;) In fact, I've already started with two new bead stitches, new stringing wire, and studied three sources on color theory. Soooo glad I chose the 8/25 reveal. 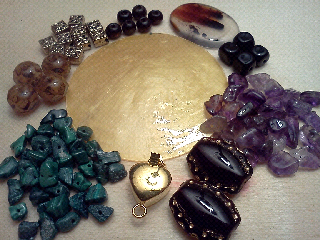 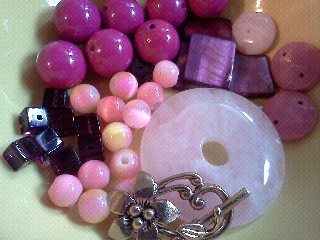