I suppose that's just what it's all about, good times and bad…life's a roller coaster.
My mother came out of surgery in record time and within the first three days had all of the dr's and staff amazed at her breakneck recovery, they even told her she could go home 4 days after cracking her ribs open…and then her lungs said "Hold up!" And they kept her for two more weeks. There's been a variety of new and old complications, some serious, some no more than frustrating, all in all though…my momma's still with us…and home.

My baby sister's cancer is a similar story, worse than we'd hoped, not as bad as it could have been. They won't be doing surgery till the end of the summer; the cancer is larger than they'd like to operate on, and has spead to local lymph nodes…but no further…so now they've opted to shrink it with chemotherapy first. I'm scared and hopful at the same time.

The anxiety (and my downstairs neighbor's cigarettes) is doing a number on my immune system. A chronic cold plus middle of the night asthma attack turned into a sinus infection…which began to work it's way into my lungs before I went to the dr for anti-buggie medicine. And telling the doc why I was all stressed out earned me a "women's wellness exam". Let's all keep our fingers crossed.

In all this I did manage to teach myself a new bead stitch. :)

It's called a St. Petersburgh Spiral, it's a flat spiral with a picot fringe… and I like it, I like it a lot! 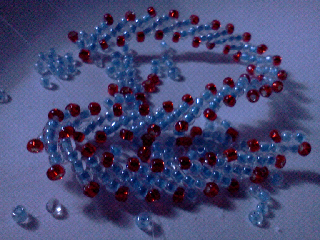