A couple weeks back I was contacted by Bill Zhang of Znetshows.com saying that he and his team had seen my blog through Lori Anderson's Bead soup blog hop over the summer, that they'd liked my designs and wanted to know if I'd be interested in trying out their new line of cultured sea glass in my designs so that they could possibly take them to the Tucson Bead and Gem show... uh...free beads...'nuf said, lol. Of course I did a little research, checked out the links in the email, the website, the blog...made a beady wish list... 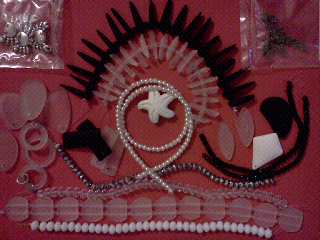 These are the beads I found leaning against my door when I came home from work last Monday. I was so excited I laid them all out and took a picture immediately so that I could start unstringing the beads. Fortunately, I made sure that all the beads were in the photo...unfortunately I didn't make sure it was a good photo before I dove in...oops, sorry. 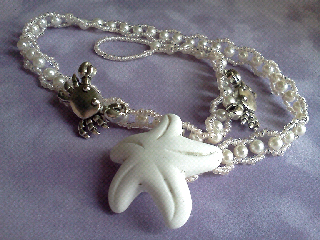 This was the first piece I did, A choker, the starfish is just gorgeous...it's on the list, lol...originally it was just the pearls bead woven in a wavy pattern and the starfish, but the bead is a bit too heavy to sit front and center. So, I added the crabs; one, to give it a more nautical presence; and two, because the now the focal doesn't look so weird off to the side. 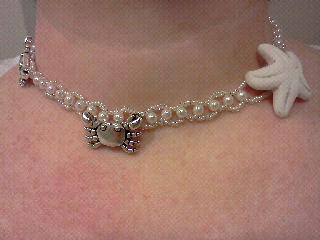 This is me wearing the "Deep Sea Pearls". It doesn't fit me the way it's supposed to though, because of my goiter, it would sit a little lower on someone else. The thing I like about it is that, in my mind it conjures the image of a sunken treasure, the pearls escaping the chest half buried in the sand and the sea life making it a part of their home.
**note, this section was in the original post, and was somehow deleted while I was fighting blogger's picture uploader for the last four pictures Thursday afternoon.** 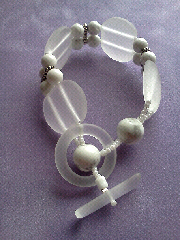 This was the second piece I worked on, I'd been holding on to these faux marble beads for just the right project and knew they'd be perfect for these two hole sea glass beads, the piece seemed to just make itself, it came along so well and so quickly. I used one of the glass circles and a center drilled glass shard as a toggle clasp. The weight of this peice is the real surprise, yet because the two hole beads are flat on the back, it wears very comfortably. 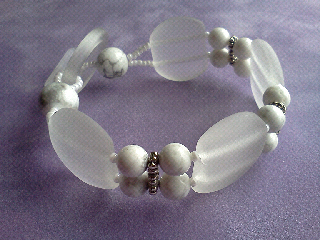 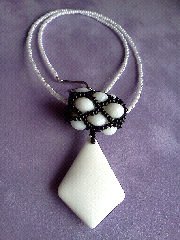 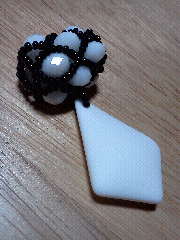 This one was quite funny. I saw the diamond shaped pendant and the first thing that came to mind was a Harlequin design. I'm sure it was in part because the beads were all black and white...but I had to come up with something with diamond shapes. The beaded bead slider is a captured bead tubular net and I personally was quite proud of it. My mother on the other hand, blurted out "that's ugly" as soon as I pulled it out of my bead box...then asked if I'd made it when all I said was "thanks", lol. She apologized for blurting it out like that, but I told her I had fans, she didn't have to like it...and we agreed to disagree. You'd have to know my mother and I to know just how funny it is. We generally don't agree on much of anything, but she is one of my biggest fans. She says it looks like a tie, I kind of agree...I just don't dislike it, lol. So I've named it "The Harlequin Tie" 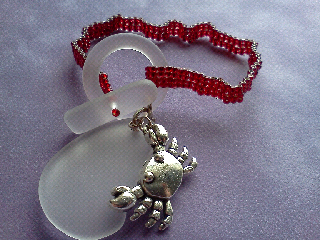 Next up is a ribbon of peyote in bright red, because I just couldn't keep with the black and white anymore, lol. Again, I used a glass circle and a center drilled sea glass shard as a toggle clasp. The ribbon is sewn over the circle and there's a piece of cultured sea glass and another of the crabs as charms. I like the feel of this one, but I'm unhappy that I somehow lost the black piece I was sent, I wanted to add it as well. I have no idea how I could have lost it, it's going to haunt me till I find it. 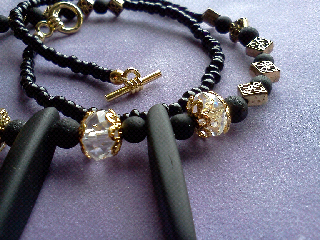 My niece saw the black top drilled shards of sea glass and proclaimed them a 'rocker's necklace'. My niece is in a school for the arts, and is holding strong to her dream of being a musician, so I did my best to accommodate. I love the matte finish on all of these beads, but particularly the black. I was going more for glam rock when I made this, and I for one thought I pulled it off...you'll have to read on to find out what she thought... 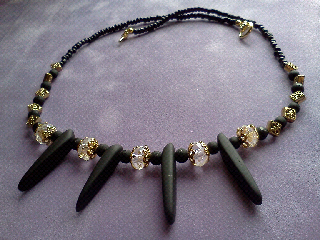 Even the spacer beads on the strand were in a matte finish, so had to use those as well, and added some gold filigree bead caps to the beautiful Tiaria Chinese crystal faceted rondels I was sent. After laying those out, I decided it needed a bit more gold, so I added some square Celtic knot beads. It's also the only necklace I made that's not a choker. I decided to add a pair of earrings to match, but I was out of gold bead caps, so instead of capping the rondells, I wire wrapped the tops of the shards. 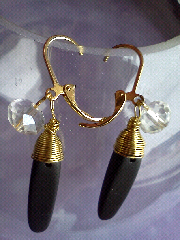 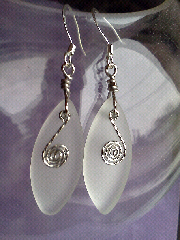 I got started in jewelry making because I could never find earrings that I liked, so I decided to make my own, since the bead weaving has taken over my designs I really haven't done much in earrings. The first pair I did didn't come out at all like I imagined them. I've wanted something to add some twisted square wire to, I've been using it in ear cuffs, but I hadn't had a chance to do anything else with it. I really like these despite the fact that they took a turn I didn't intend, and I think I'll be making a pair for myself. 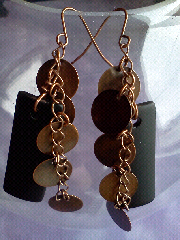 These earrings are my favorite though. The first thing I think about when I think about the ocean is the breeze off the water. I was born in Florida, it was a really long time ago that we moved inland, but I can still hear the sea glass wind chimes. This is my version. These thin copper sheets clink ever so lightly against the glass and make a beautiful wind chime sound.
And now we come to the last, but certainly not least, piece of from the sea glass sent to me from Znetshows.com. Kiara (my 7 year old niece) decided I didn't do the Rocker necklace right. So, I gave her some of my leftover beads, a handful of matching beads to choose from...a ruler, some bead wire, and a math lesson later...Kiara's "Rocker Necklace". She's into motorcycles and Barbie, fast cars and heels as high as her momma will let her wear them...I think we're in for a bumpy ride. 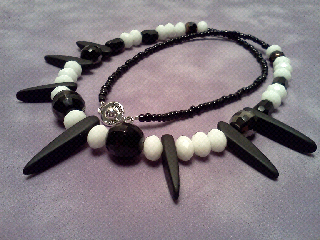 Actually, that wasn't the last one, I have four other projects in progress, but because my internet and blogger aren't seeing eye to eye, and the dedline is tomorrow, I'm going to post this now, and edit later if I can get them finished before I head to work.

***Edit 1/25/13
If you follow Znetshows on facebook, you've already seen these...everything here was done by deadline...but I couldn't get them on here for some reason, and when I sent them to Bill they were compressed in the email because they wouldn't send full size, so they aren't really visible in the album he has set up for each of us. I cannot believe I forgot about Picasa, it was on my phone the whole time I was strugling to get this posted, I've been kicking myself for an hour. 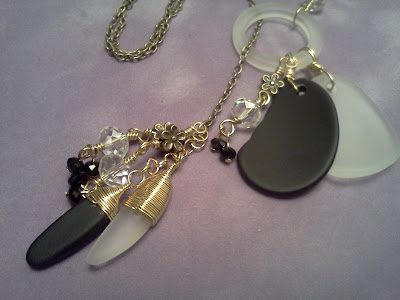 This piece came out of nowhere this afternoon, while I was waiting endlessly for each photo to not upload...I'd had the chian and flower beads out, just sitting there in front of me...then I found the large black piece when I dropped one of the small black Tiaria crystal rondels...and just like that, it...became a Sea Glass Lariat
﻿ 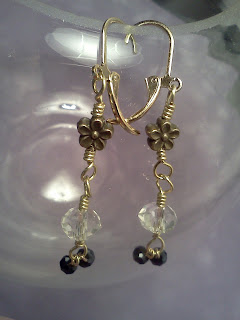 I didn't set out to have a pair of earrings to match, I don't usually for long necklaces, I don't like the overdone look it creates, but I set the lariat asside and began to clear my workstation and found that either I'd forgot to add two strands of the flowers and crystals...or it really did make itself, lol. 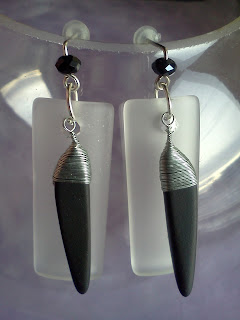 I had to really think about these. I had them sitting here on my desk for a couple of days, the black shards just laying there on top of the white, while I brainstormed ways to join them...then I decided that's exactly how I wanted them to look...less is more, right? lol There is one change with these, I made the posts. When I first started making earrings, I hated that there was so much wire right there at the ear when I used earwires...I like earwires, but it leaves the lobe so plain and lonely...so, I started making the one's for myself like these. The Tiaria rondele bead sits against the lobe, so you're wearing posts and dangles ;) 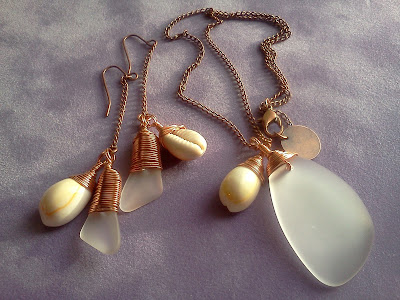 ﻿This necklace and earring set mean a great deal to me, the shells are from my grandmother's collection. She used to pick them up on her travels, some are even from Arizona. I've had those shells for almost three years now, since she passed away, and I've attempted to use them twice, but never could find anything that really felt right. These three were actually in the recjected bag after I sorted them when I came home after her funeral because they had jagged holes in the fronts where they'd been hit against rocks or stepped on, I couldn't throw them out though, and I'm glad I didn't, that made them perfect for wire wrapping...and this necklace. I was pretty emotional while I was working on this one. She saved everything I made her, she'd always thought I was talented, and told me before she passed away that she thought I could do something with it. I wish she could see how much I've learned in the last three years.

Thank you Bill Zhang and Znetshows, for the oportunity to participate in this challenge, I was excited for the challenge, and a little overwhelmed at the size and weight of the beads, but I will definately be getting some of these beads for future designs, they're just simply beautiful.
Posted by Klaudete at 4:30 AM 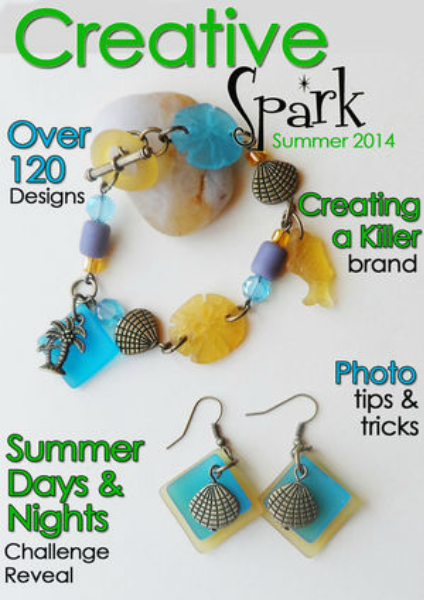